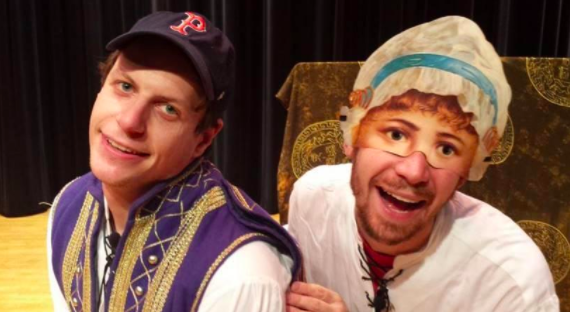 MythMasters Performers in Action
WAYLAND, MA–Ancient Greeks in the auditorium?

That’s what the students at Wayland Middle School were welcomed to on Friday, December 8th for Cultural Enrichment Day.

The event involved three performances by the MythMasters, two actors reenacting myths from ancient Greek civilization. After each 15-20 minute show, the MythMasters held discussions with students about their meaning and purpose.

The program is the brainchild of David Zucker and Richard McElvain and is offered by Young Audiences of Massachusetts which provides a variety of educational-oriented performances, workshops, and residences for schools and students.

According to the creators, the myths “force us to reflect on ourselves and our lives. The idea [is] that a myth is not a lie, but an investigation into the human condition.”

According to Principal Gavron, the school has been hosting cultural enrichment performances for at least 20 years and are selected by the PTO to highlight cultures from various regions of the world that tie in with the curriculum. “I think celebrating the arts and enjoying the many ways people communicate history and culture is a true gift the PTO offers us,” she notes.

To accommodate the event – which occurred during a 54 minute block at the end of the school day – Principal Gavron said the administration borrowed 10 minutes of time from each class and reduced a couple of passing times from four minutes to three.

The first performance was called “Phaeton and the Sun Chariot” and was about the sun god’s son (Phaeton), wanting to take a ride on his father’s sun-filled chariot across the sky, against his father’s wishes. As legend has it, Phaeton lost control and plummeted to the Earth, scorching some of the Earth and many of its inhabitants, including himself. During the Q&A which followed, one student suggested the moral of the story is that “you better be careful what you wish for.”

The second performance was the story of “Echo and Narcissus” about a nymph named Echo who suffered a curse limiting her to only repeat what others have said (this is where the word “Echo” comes from). Echo fell in love with a handsome man named Narcissus who loved only himself (this is where the word “narcissist” comes from). As the story unfolds, Narcissus fell in love with his reflection to the point where he never could leave it, forcing Echo to stay there by his side until they both withered away. In the Q&A, students claimed the moral of this story is that people shouldn’t love others because of their looks, but because of who they really are.

The MythMasters last performance was called “Orpheus and Eurydice” and was about a talented musician named Orpheus who fell in love with a woman named Eurydice.  When Eurydice died, Orpheus was heartbroken and pleaded with the gods of underworld (where all people went when they died) to resurrect Eurydice. The gods granted Orpheus’ wish on one condition — Eurydice had to walk behind Orpheus who could never look back at her until they exited the underworld. Unfortunately for Orpheus, however, he accidentally looked back at Eurydice, and she was returned to the underworld without Orpheus. Students noted that the moral of this story was more complicated and was harder to find.

Students at WMS found the experience both fun and entertaining: “I think that the MythMasters were awesome. My favorite part was about Narcissus and how he was obsessed about himself. I [also] liked it when they picked people from the audience,” said Bethany Foreman, a 6th grader.

“I think it was very interesting to see what a few Greek myths were.” added Jaden Kane, another 6th grader.

According their website, MythMasters provides: “a skillful blend of mime, comedy, drama, puppetry, masks, music, reverence, irreverence…[where with] lots of audience participation, the gods and goddesses, heroes and villains, monsters and maidens of Greek mythology walk the earth once more.”

Zucker and McElvain are also responsible for two other similarly-structured educational performance shows: Shakespeare Guyz and MathsAmazing. They said they were inspired to create MythMasters “there is something about these stories that captivates the imagination of young folk.”

Some images and data borrowed rom Young Audiences at http://yamass.org/our-programs/mythmasters/